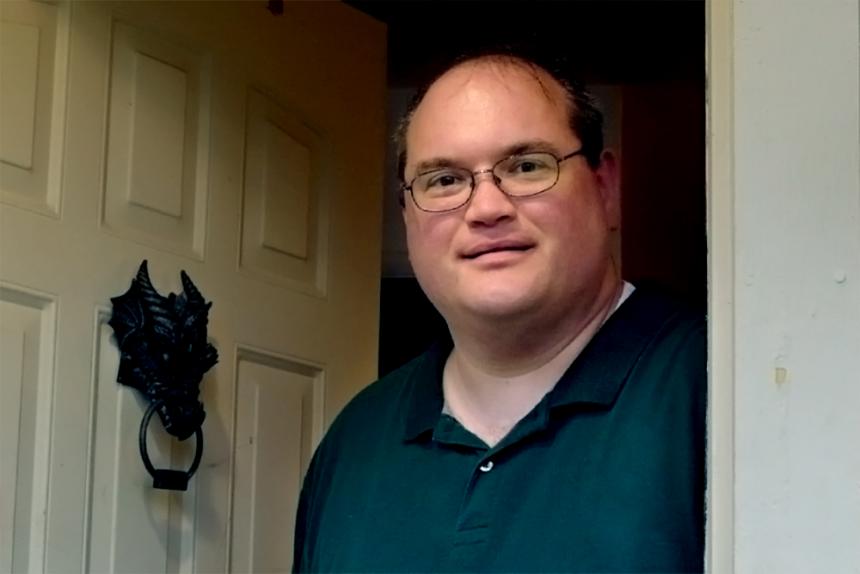 Hello to all you humans out there.

A few days ago, a friend of mine in his early 40's, Michael Danielson, passed away in his sleep.  Truth be told, he was closer to my husband; they had known each other for almost 20 years.  In excellent nerd fashion, they met each other via mailing list during the early days of the Internet when "frames" on websites were a thing and Geocities was cool.  I was fortunate enough to spend time with him and his family in the month of October when they graciously offered to help me film scenes from my music video for "Monster of the Week".  Not only did they help with filming, they sheltered us, fed us, and included us in family outings, most notably a Harvest Festival at a local elementary school.  I don't have any children, nor do I plan to, but staying with the Danielson Family for several days made me contemplate a different kind of life.

It came as a shock.  Completely unexpected.  I sat on the couch in utter disbelief.  No, this must be an awful joke.  Someone is going to jump out and yell "April Fools!", right?  Except that it was already April 8th on this side of the world, so it wasn't a joke.  It wasn't a prank.  This had happened.  This was real.  As much as we all like to believe there is justice in the universe, that there is some kind of balance, and that "bad" people get their just desserts and "good" people triumph, it turns out that there isn't.  Because I can see no reason why Michael needed to leave.

There were a lot of tears from the both of us.  I, in my trademark fashion of being extremely upset, vomited in the toilet, my body convulsing with each retch.  It was strange to hear my husband cry; he rarely cries, and I mean RARELY.  I've only seen him cry on three occasions.  The first time was after a huge fight, during which I was set on leaving Belgium to go back to the US.  The second time was when our beloved grey cat, Chubs, died in January of this year.  This was the third time.  And, because it was so unexpected, it was a sucker punch, obliterative to the heart, a catalyst for the sobs that would erupt from whatever was left in its wake.

What makes it worse is that we can't do anything from so far away.  We can't offer hugs or hand holding.  The only shoulder we can offer as a shoulder to cry on is purely of a spiritual nature, since we can't afford last-minute tickets for the funeral.  So, we offered our sympathies via phone call.  I bought a card to send, though, really, what is a card going to fucking do for a family who is devastated?  And why do the damn cards always look the same?  If card companies can make hilariously rude birthday cards, you would think that they could make sympathy cards that didn't feature a flower or a shot of the sky filled with puffy, white clouds.  Yes, death, as proven by the second paragraph written above, is not a joke, but surely there must be a better way to address it other than heavenly images and white lilies.  And what if someone is an atheist and doesn't believe in heaven?  Are there even sympathy cards for atheists?

I cannot help but feel anger.  For some reason, the world saw fit to remove one of its best people from this earthly plane.  I'd like to dick punch whoever is in charge, definitely in sets of 20, with a minute of rest in between so I can ice my knuckles.  Because, I'll be real, Michael was one of the nicest people I had ever met.  He was obviously a loving husband and father, not to mention a martial arts weapon enthusiast.  He marched to the beat of his own Taiko drum.  He was a fantastic cook.  Seriously, I do not give this compliment to just anyone.  But he made us low carb meals every day that we stayed, and, by god, they were awesome.  He was very well-read and really believed in self-education.  His funny faces were actually funny.  He was hilarious and clever.  If you watch my behind-the-scenes video for "Monster of the Week", you can witness it for yourself: https://youtu.be/MQMjrbPhfkU

Not only was he incredibly kind, but he was patient AF.  And I can, hand on heart, say this because we spent MANY HOURS at night in a rainy, freezing cold forest in Washington, filming my stupid music video, with a fog machine hooked up to a power inverter hooked up to a car battery hooked up to potential electrocution.  While I was shivering and having a meltdown, Michael did not complain once.  He held it together.  He was in good spirits the whole time.  He was a damn rock.  It was admirable.

Which is why I'm sad that he's gone, because he shouldn't be gone.  It seems wrong on so many levels.  This world is clearly worse without him.  He should be with his family right now, drinking a cup of French-press coffee with extra milk, chatting about funny work things, and thinking about the slow-cooked pulled pork and spaghetti squash he has planned for dinner.  Maybe G has soccer practice after school, so Michael will make sure food is ready to serve by 7:30 pm because, by that point, soccer practice will be over and G will be starving.

This is only what I imagine, though. I am fully aware that this scenario playing in my head will not exist anymore.  My heart, whatever is left of it, goes out to his wife and son, though I know it won't make much of a difference.  His family and friends will always feel the permanence of this loss.  Every holiday and birthday will be that much emptier.  Thanksgiving this year will be known as the first Thanksgiving without dad.  And, sadly, April 7th will always be significantly seared in their brains, and it can never go back to just being an ordinary Spring day.

So, with all that said, I raise my coffee cup to you, Michael.
I really wish I had known you longer.

It sucks even more that it was unexpected. When death blindsides us, it makes it a lot harder to handle.

Thank you Ryako for your sweet & heartfelt tribute. It gracefully released the tears that I'd been withholding for 11 days. Bless your heart.